So a delivery man leant very heavily on my door buzzer a few minutes ago. It's a very loud buzzer, so you don't really need to hold it down for longer than a second. But that's not important. The delivery is what was important.

A box. An ordinary cardboard box. A kind of heavy box. I signed, and brought into my office. The checkered logo on the side gave a hint... 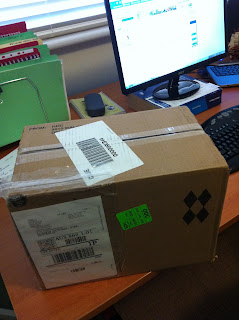 I knew this was a moment I needed to capture for posterity. So I photographed the very first reveal, after the packing tape had been carefully sliced, one side of the cardboard peeled back... 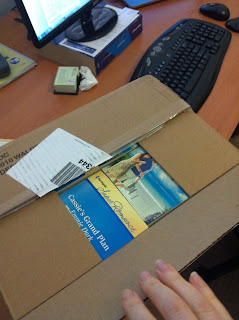 And then I styled the next one, just so... 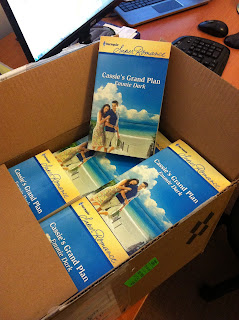 Goodness there are a lot of books in that one little box.

The mailing label says the box came from New York originally. I don't know what all the barcodes mean, but they're quite impressive. 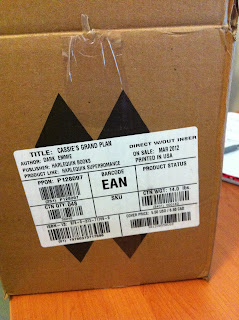 And now I'm remembering that ages ago, I meant to record some of the witty things I wanted to write in the front pages of copies I'm going to give to the people who've been part of my journey. I've forgotten them all now.

Just going to sit and look at my box for a while.
Posted by Emmie at 3:04 PM 15 comments

It's been a while since I've done a Friday Favourites post, so I figured it was time to get back into the habit. Especially given that it's Friday, I'm a little bored with my 'to do' list and writing a blog post seems far more entertaining than actually doing any work. :)

I've been listening to lots of music recently. Funny, when I'm writing, I prefer silence -- no distractions at all. So given all that hard work on revisions for the past few weeks meant lots of silence, I've been making up for lost time catching up with some new tunes (or old tunes that I missed the first time round).

First up, Aussie band The Panics. They've been around a long time but this song, Majesty, is reasonably recent and I adore it. Whenever it pops up on my iTunes shuffle, it's one of those songs that makes me stop and listen (this could be the reason why I don't play music while I'm writing -- I'd purposely have to listen to stuff I didn't like!). It's a story about Australia, with lovely lyrics that evoke key historical events in beautiful poetic images. (To the young eyes across the sea, Who live and return to sanctuary, Of defiant tales in stone, In a higher prayer alone, In the brightest chains of gold, In the furthest place from home.)

Pick number two -- a band I discovered watching the TV show Chuck, which has a pretty awesome soundtrack most of the time. Seriously, I watch that show with my finger hovering over the Shazam app on my iPhone. If the music programmer from Chuck needs someone to inherit their music collection for any reason, I hereby volunteer.

Anyhoo, the band I discovered was The National. I've since bought two or three of their albums and they've been on high rotation in my house and car. I find it incredibly hard to pick just one of their songs to highlight, but I really do love this one Fake Empire and am just a little bit in love with the low, gravelly voice of the lead singer. The song is five years old or so, but new to me.

(NB: Not the official video, but a goodie nonetheless.)

Another band that I discovered watching Chuck is Frightened Rabbit. I adore their song Keep Yourself Warm, but I won't embed it here as the lyrics are, shall we say, adult in nature. Click on the song title link if you want to know more... Don't say I didn't warn you.

Last, but not least, let's give a little airplay to a brand new Aussie band, Underlights. I heard these guys on Triple J and they're an 'unearthed' band, which means they're unsigned and if you're quick you might still be able to download this song for free from the Unearthed website.

They don't seem to have a filmclip (I guess that comes with having a record company) but this is such a happy, bright song, it seems just right for a Friday.

And on that note, I hope you have a great day and get to spend sometime in your own head listening to whatever music it is that does it for you. If you've got a track you think I'd enjoy, please leave a comment and let me know -- I'm not absolutely dependent on iTunes for exposing me to new songs!!
Posted by Emmie at 11:45 AM 2 comments

That's me singing Love Cats by The Cure, but I understand if you couldn't really tell. The reason for my singing is that today I officially join The Love Cats Down Under as a regular blogger! Yippee!

They are having a launch party to welcome me and fellow new Love Cat Annie West (pretty excited to be joining with an author of Annie's calibre -- but then the Love Cats is filled with amazing writers!) so check it out -- there are prizes to be won. Prizes, I have to admit, I wouldn't mind winning myself!!

Back to normal programming

Hi everyone, sorry I've been a pretty-much absent blogger for the past few weeks.

But I am proud (and not a little relieved) to say that my revisions for 'In His Eyes' are done and sent! Phew! It's been a big effort and has left me more than a little brain-dead. The past few days I've been trying to catch up with a massive 'to do' list of things that all got put on hold while I was in the revisions cave. (I know why they call it that now.)

I'm going to make an effort to keep more regular with blogging, especially now that we're on the countdown to Cassie's Grand Plan being up on shelves everywhere (both IRL and online)! Book Depository helpfully tells me there are only 49 days to go -- woo hoo! (Book Depository also tells me that people who viewed Cassie's Grand Plan also viewed books including 'The Notebook' by Nicholas Sparks and 'Can you Keep a Secret' by Sophie Kinsella -- and I'm quite happy to be in that company, lol...)

The publicity trail appears quite daunting from this end of things, but I'm sure it will become more manageable when I get into it. I am going to run quite an exciting competition which I will tell you all about soon.

Friday Favorites -- Getting set for the new year

I'm not usually one for making a long list of new year's resolutions. What I've found is that it's better to just come up with one simple idea and use it as a kind of "theme" for the year. 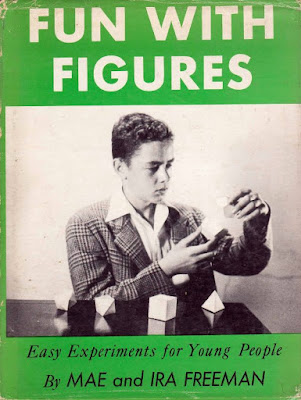 That's not to say that I didn't have any fun in 2011. It was a year that certainly came with its highlights (a big birthday party to start the year, a holiday in New Orleans, multiple trips to Hong Kong for work -- not to mention getting two books sold!). But it was also a year filled with a lot of very hard work.

Somewhere along the way, buried under lots of work and responsibilities, I feel like I lost a bit of my sense of fun. I think I noticed it most when I was part of the scavenger hunt back in Nov/Dec, because although I wouldn't want to spend my life doing exceptionally silly things like that, I really noticed how much fun I was having just playing around.

So, for 2012. More fun. More silliness. More spontaneity. More making an effort to get my bum off the couch even when I'm tired. Less worrying. Less work intruding into all hours of the day and night (and weekends). Less introspection, more insurrection!
Posted by Emmie at 4:19 PM 4 comments