Baking and trophies (but not trophies for baking)

I have never been a sports-minded kind of girl. (Except when it comes to watching some sports, like baseball, for obvious reasons like CJ Wilson.) So my childhood/teenage bedroom, whilst exceptionally stylish, was never filled with trophies. I was a musician and scholar, so I had certificates, and ribbons, and funny colored-cardboard meritorious achievement slips from the local Eisteddfod, but I didn't have trophies.

But now, in my office, I actually have a shelf set aside. Yes, it's only taken forty years, but I finally have a trophy shelf. Check it out: 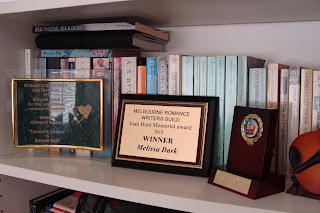 The latest trophy is the one on the right -- for First Book Sale from the lovely ladies at MRWG - the Melbourne Romance Writers Guild. Next to that, in the middle, is another MRWG trophy -- for the Joan Hunt Award which I was presented with last year. It's an award that's given each year to the member of the group who's put in the most effort during the year. This year the trophy went to the amazingly talented and prolific Charlie Kramer from an outstanding list of contenders.

The trophy on the left is for my RWA Australia Emerald Award, presented at the RWA conference mid this year. (Which, incidentally, is how I ended up with Cassie's Grand Plan coming out with SuperRomance!)

The MRWG trophies are presented at the annual Christmas party, which is a wonderful meeting where the group gathers together to celebrate the achievements and wins throughout the year. I've been a member of MRWG for four years in January (gasp!) and I have learned so much and met some lovely people as a result. I know writing groups are not for everyone, but for me, having a monthly meeting to hold myself accountable for meeting goals and writing a set number of words was really helpful. Writing is a very solitary thing, and for people like me who need a measured amount of interaction with actual human beings, getting together with a like-minded group of people regularly was a life-saver.

The MRWG gals have encouraged me, commiserated with me over too many knock-backs and rejections to count, and celebrated with me when the cards finally fell into place.

So, where's the baking in all this, I hear you asking? Well, no Christmas party would be complete without a table groaning with delicious goodies, and the MRWG party is no different. This year I made "Honeycomb Cream" cupcakes. I love a good Women's Weekly recipe -- they just always turn out well and the decorations always seem achievable. 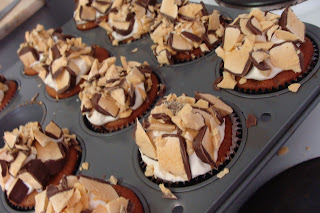 Carving up the Violet Crumble for the topping was actually quite good fun. 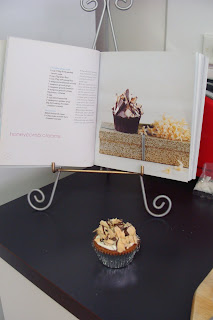 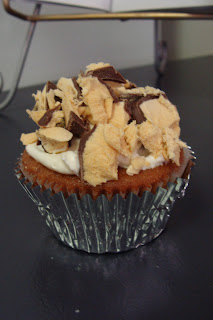 I was pleased with how they turned out compared to the picture in the book. (Again, thank you Women's Weekly.) Brown cupcake cases would have looked nicer, but the silver gave them a Christmassy look and I put them on a gold plate to serve them up.

This weekend I'm going to be baking my Christmas cake, with fruit that has been soaking in Grand Manier for almost three weeks. It's going to be 30 degrees (85F) or something fun like that, so having the oven on for three hours is not the best idea, but that's Christmas in Australia for you.

Hope your Christmas plans and preparations are all going well.
Posted by Emmie at 10:56 AM