In His Eyes cover

Check out the absolutely stunning cover for my August release, "In His Eyes". 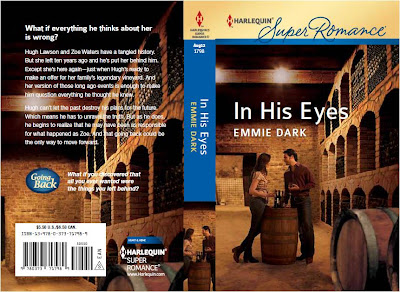 From the back cover:


What if everything he thinks about her is wrong?


Hugh Lawson and Zoe Waters have a tangled history. But she left him ten years ago and he’s put her behind him. Except she’s here again–just when Hugh’s ready to make an offer for her family’s legendary vineyard. And her version of those long ago events is enough to make him question everything he thought he knew.


Hugh can’t let the past destroy his plans for the future. Which means he has to unravel the truth. But as he does, he begins to realize that he may have been as responsible for what happened as Zoe. And that going back could be the only way to move forward.

Email ThisBlogThis!Share to TwitterShare to FacebookShare to Pinterest
Labels: Emmie Dark, In His Eyes, SuperRomance