Travel tales: In praise of tea

One thing that's surprisingly hard to come by in the US is a decent cup of tea. (Dedicated coffee drinkers tell me the same thing about the coffee...) When I was in LA earlier this year, I clearly hit on the hipster part of town, because tea options were reasonably plentiful.

But, in general, the attitude when you ask for a cup of tea veers from mild confusion to outright disdain from your waiting staff ("Do you realise you're making my life difficult?").

In Artie's Diner (see my story about that over on Louise Reynold's blog) asking for a cup of tea had the waitress frowning, and finally appearing with a crumpled tea bag -- I hate to think where she found it.

Of course my problem is compounded by the fact that I no longer drink black tea. (For some reason it makes me nauseous these days, which is a shame, because I still like the taste!) Asking "What kind of tea do you have?" is akin to asking "Where is your first-born and your sharpest knife?"

My saviour in New York was the artfully named Sanctuary T. They not only had a THREE PAGE MENU OF TEA, but it came with a helpful "mood wheel" so you could pick your tea ACCORDING TO YOUR STATE OF MIND. 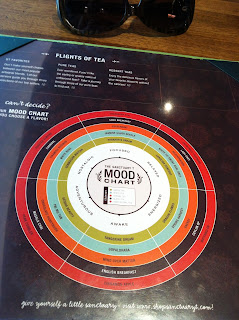 If it needs stating, I fell a little bit in love with Sanctuary T. I went there so often the staff began to recognise me. I had breakfast tea there. I had afternoon I've-walked-a-lot-and-need-a-rest tea there. I had it's-too-early-for-cocktails-but-I-need-a-drink tea there. 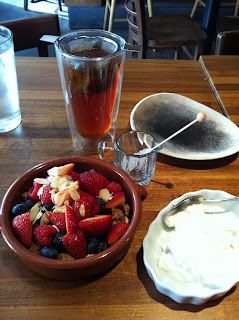 This is my breakfast -- did I mention the delicious granola with berries (and yoghurt on the side, without a problem)?

Tea was served in these tall, double-walled glasses. You got a little wooden plate to sit the tea leaves on when it reached your desired strength (a decision they let YOU make, as befits decent tea drinking protocol) and offered free refills of hot water (very useful when you're just up to a crisis point in whichever Kindle book you're reading at the time).

If you wanted sugar (ugh) it was provided in crystal form on a little stick to stir into your glass. Classy.

I think, if Sanctuary T existed in my neighborhood, I'd likely be forced to live there. Just as well then, it's on the other side of the world. Sort of.