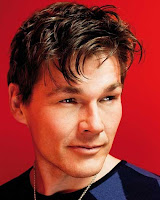 Some of you might be wondering, who on earth is Morten Harket? I give you:
Now, do you remember?
As my family and many of my friends know, I had a crush on a-ha for years. Years and years. I never got to see them live when they toured Australia in 1986, because my parents said I was too young to go to Melbourne for the concert (we lived in the country). So in 2005 I flew to London to see them live on stage at Wembley. Best. Concert. Ever.
I also went to London again in 2010 to see them perform in their farewell concert at Wembley, because, you see, a-ha is no more. They went splitsville after 25 years together. *pouts*
The power of my teenage crush is such that my brain still retains the birth dates of all three members. And when I looked at the date today - 14 September - my first thought was, Happy Birthday, Morten.
Oh, and my second thought was: today's the day I'm blogging on the SuperRomance Authors Blog. So I did that. Go there and check it out.
Posted by Emmie at 11:33 AM