Yes, the competition has closed! But I received this last-minute entry just before the deadline, only I've been too busy (read: slacking) to post it up. So, here we go -- Cassie went to West Australia (just like in the story!). But the book travelled much further than Cassie and Ronan managed on their Country Style store tour.

Thanks to the lovely Kerryn L, here is Cassie at the southern tip of Western Australia: 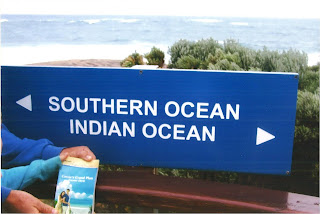 As Kerryn says: This is Cassie at the most South Westerly point of Australia's mainland. She would have gone there had her WA trip had more recreation time - its only 3 hours south of Fremantle after all!

And here is Cassie inside Jewel Cave, a spectacular limestone cave in the Margaret River region of Western Australia. 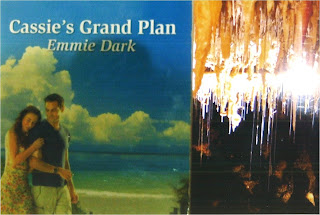 I'm so thrilled to see how Cassie has been "getting around" (in a nice girl way, of course!).

Thank you to everyone who has taken the time to take and submit photos.

Stay tuned -- I'm going to be announcing the winner of the Photo Bomb competition very soon...
Posted by Emmie at 12:30 PM