Launch celebration for In His Eyes!

I'm in Perth, Western Australia, for work this week, but despite a long day's work, I couldn't let the official launch day for In His Eyes pass without celebration!

I asked a few locals for a recommendation for a great wine bar nearby and I was told to head for Bathazar. I have to say it was very good advice, because if my characters Hugh and Zoe were to open a wine bar (and given Hugh's entrepreneurial spirit, that's entirely possible...) it would be one just like this.

The photos are a little on the fuzzy/dark side, despite the best efforts of my roped-in but dedicated work colleague/ friend/ unofficial photographer (he's been the one behind the camera in a lot of my portraits including most of Cassie's tour of the US and I owe him at least the glass of bubbles I shouted him tonight). The bar was dark and intimate and very, very awesome.

It wasn't just awesome because of the atmosphere. The waiter gave us the wine list and they had quite an impressive and very international selection. I knew I wanted red wine, but I wasn't sure what kind. So I asked for him to chose something for me -- something rich, but not too "tannin-y" and fruity but not too light. He frowned for a moment and then said, "Hmm, you're interesting. Give me a moment."

Not everyone appreciates being called "interesting". But I'm quite okay with that. Especially in this context. So he brought me a wine to taste -- something not even on the list. A something that I've already forgotten the name of. But it was perfect. Rich and full of flavour, but not too intense.

I am a little bit of, what you might call, a wine-wanker. I fully admit I know only enough about wine making to be dangerous. And to potentially make a fool of myself by asking questions just knowledgeable enough to be really stupid. When I tasted the wine he'd poured me, I guessed it was Italian. It was Spanish. "Right continent!" I crowed. It doesn't take much... 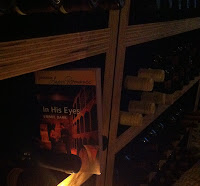 So here's In His Eyes, snuggled, kind of where it belongs, amongst a wall full of wine.

Now, don't forget that if you're partial to an occasional glass of wine, I have a special giveaway for anyone who leaves a comment this month. You could win a pair of stunning Riedel wine glasses.

I'm also dishing the goss about some of the inspiration behind In His Eyes over on the SuperRomance blog, so come visit me there too.

Happy In His Eyes release day! Hope you enjoyed a nice glass of something -- whatever you chose to drink. :)