I'm tired. Really tired. So was everyone on the plane I caught home tonight -- about 50% of which were RWA-goers, I'm pretty sure.

It was a great final day of the conference, everyone was still excited (if a little tired and emotional) from the night before, and there were still lots of awesome sessions and speakers to look forward to.

The morning started off with a great panel discussion: "Speed Dating with Aussie Publishers". The speakers  included Anna Valdinger from Harper Collins, Clare Foster from Curtis Brown, Joel Naoum from Momentum, Haylee Kerans from Harlequin Australia, and Larissa Edwards from Simon and Schuster.

I tweeted a lot from this session, so for best results, go visit me there and check it out. (You can also search the #RWAus12 hashtag  for more awesome tweets from lots of wonderful peeps.) It was a great session that basically reinforced the fact that publishers generally are hungry for new content and while you've got to find the right home for your story, you need to "date around" to find your own happily ever after.

Once again, I missed a few sessions today. Sorry. I had a meeting or two, and I also had to pop out and visit over at the LoveCats for the Sunday Smooch (which includes a little excerpt from In His Eyes and a chance to win a copy!).

I did get to see Dr John Barletta talk about romantic attraction for a while. I wished I could have  stayed longer, because I love psychology and he was delving into all kinds of love theories and human behaviour stuff. One thing he said that I thought was useful when considering character psychology was that personally he extended the "nature/nurture" elements to include "nature, nurture, fate and choice". I think they are four great headings that would make for great character development and brainstorming. Just think about how the forces have affected your character in terms of nature (their genetics), nurture (their upbringing), fate (the good or bad luck they've had in their life) and choice (those they've made, and those they've avoided making).

Another good session today was from Kate Cuthbert on social media. I think next year it would be great for the conference to run at least a couple of sessions on social media -- one for beginners and one for those more advanced. Kate had some great things to say, including some strong views on the author's role on Goodreads (according to her, authors just shouldn't be participating on there!) which sparked lively debate. Unfortunately there were also people who still needed info on how to set-up Facebook pages, etc, which steered the conversation away from more of the fun stuff I was hoping she might get into. Still, those guys needed the advice, and hopefully they're all have a merry time on Facebook now!

The conference concluded with another publisher speed dating panel, which pretty much said the same stuff as the one in the morning. There were also big, and very well-deserved, thank-yous to the conference committee.

Next year's conference is in Fremantle, and the video that the WA team put together to advertise it was fantastic! I hope it will be up on their website soon. Some exciting guest speakers are already lined up.

I am ashamed to admit that I just simply forgot to take photos today. I was too busy finding all the people I wanted to say "hello" and "goodbye" to, and generally soaking up all the energy and atmosphere I could while I was there. So here are the two photos I did take when I remembered I had none for this blog post: 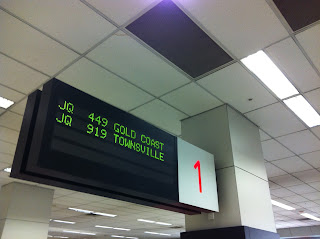 It's chilly back home here in Melbourne, and a little drizzly -- none of that gorgeous blue sky and sunshine. But I've brought a bit of sunshine home with me, I'm sure, in the form of writing inspiration and new enthusiasm. I can't wait to get stuck into my book again!
Posted by Emmie at 1:27 AM