It's Day Eight here at: 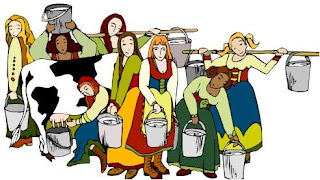 The 12 Days of Christmas
Romance and Food
Blogging Extravaganza!

I have another wonderful author and another wonderful recipe for you today! Alison Stuart is an award winning published author of historical novels with romance...and the odd ghost...and a bit of time travel. If you're a fan of Downton Abbey, you'll love her latest release, Gather The Bones. As befits a historical author, today Alison has delved into the family vaults to bring us an absolutely delicious looking family recipe!

Every family has a legendary cook and in my mother’s family that person was “Aunty Hetty”  (Or Aunty Etty as I knew her) – my great aunt.

Auntie Hetty was my grandfather’s eldest sister.  Typical of life in the north of England, especially in large families, where they were used to living in confined accommodation,  when she married she and her husband, Horace, moved into the family home in Salterforth with her parents.  They were allocated the front bedroom.  My greatgrandparents had the back bedroom and Auntie Eva, who never married, a  small front bedroom,  whilst the attic housed two double beds and the bachelor brothers slept there.

Eva always did the ironing and the two girls were the ones who did the laundry.  They all worked in the local cotton weaving mill, where Horace was an ‘overseer’.  He checked the cloth for any faults and marked the fabric accordingly. Hetty was resigned to the fact that there were no children. In her late 40s, she thought it was the change of life, not suspecting she was pregnant.  She was always on the plump side, so her pregnancy didn’t show and apparently she had no other symptoms, like morning sickness.  She gave birth to a daughter.

Typical of the family hierarchy, Great Granny was head cook and Hetty learned all her skills from her mother. There was no cook books, the recipes were just passed down by word of mouth.  Great Granny never used scales to measure ingredients so her recipes have come down with measurements such as a “tea cup” and a “dessert spoon”.

Hetty inherited her mother’s caring and loving personality  and was adored by nephews and nieces .
As a child I had met Aunty Etty but she was indistinguishable from the rest of the “prickly aunts”, of which my mother seemed to have many.  In the early 80s, at the age of 21, I made my first big overseas trip by myself and in a chilly December I went to stay with my mother’s brother in Lytham St-Annes.  My mother’s family are a close knit bunch even now and even then  it was quite usual for several generations to share the small terrace houses that still line the streets of the old mill towns.

By that time Aunty Etty was living in Morecambe with her daughter and her family. As the slightly exotic Australian member of the family, we went up to take tea with her.  A large afternoon tea was produced, complete with a plate of the famous “mince pies”.

Aunty Etty cocked her head and looked me up and down.
“Well, our Alison,” she said. “How old are thee?”
“Twenty one, Aunty Etty.”
“Twenty one and tha’art not married?” She looked appalled.
“Err…no.”
“What’s wrong with thee. Aren’t there any nice boys in Orstralia?”

To end this embarrassing conversation, I took a mince pie and bit into it. The sweet pastry melted in my mouth. At last a genuine Aunty Etty mince pie. I told her that her recipe was used faithfully every Christmas and all thoughts about my failure in the marriage stakes were forgotten. She plumped up like a hen and we discussed baking.

Aunty Etty’s mince pie recipe is all about the pastry. You can choose whatever fruit mince you wish.  This year, for the first time I’ve made my own fruit mince. I hope it tastes OK – I took the lid off the jar and my eyes watered from the brandy fumes.

Over the years I have made a small adaptation of my own to her recipe so what follows is my take on that wonderful old lady’s recipe. Enjoy J 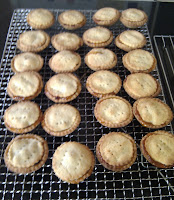 Sieve flour and add sugar.
Rub in butter until mixture resembles breadcrumbs
Make into dough with egg (my mother says the secret is making the mixture with just one egg and it needs to be really well worked in)
Turn on to floured board and proceed as for normal pastry.
(A mince pie is one that has a covered top/ a mince tart generally just has a bit of decorative pastry on the top) 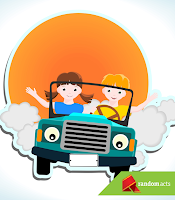 And another reminder from me about Random Acts of Kindness. The latest hint is one that is very important at this time of year -- car kindness. We're all in a rush and none of us wants to be stuck in traffic.

This weekend, decide to be the nicest driver you can be: patient and polite.

And you can also send Random Acts a donation and wear a smile all day.