Welcome to day six of:

Halfway through! Is your Christmas shopping all done?? No, mine either. But on to happier topics...

My guest today is the absolutely awesome author and (I'm very proud to say) my SuperRomance stablemate, Sarah Mayberry! Sarah's heartwarming (and quite spicy) romances are the stuff of legend and like so many of my wonderful Extravaganza guests, her books are well-represented on my shelves. Sarah has not only brought us a wonderful tale about a family heirloom Christmas pudding, she's even provided the recipe! With all this recipe goodness we're serving up for TDoCFaRBE, there's no excuse not to be straight into the Christmas baking this year... 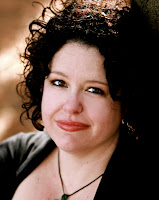 The Legend  of Nana's Christmas Pudding
by Sarah Mayberry

Before I start waxing poetic about my Nan's pudd, a big thanks to Emmie for inviting me to blog about something so close to my heart (and stomach). With Christmas just days away, I am about to launch into the marathon that is my Day of Pudding Boiling (you'll see why it's a marathon in a moment) so this topic is top of my mind right now.

The legend of my grandmother's Christmas pudding is a bit like Emmie's fruit cake story in that until they've eaten some of my Nan's pudd, many people don't realise they even like plum pudding. In fact, some people might even consider themselves avowed plum pudding haters (poor, deprived fools!). Usually this is because they hate sultanas or currants or some other variety of dried fruit. I must admit, if I was held at gunpoint  with bright lights trained on me, I might also confess to not being the world's greatest sultana lover, too. But all such considerations go out the window when faced with a bowl full of Nan's goodness.  There's something about the boiling process or perhaps it's the sheer simplicity of this recipe that results in a really lovely, rich pudding that isn't overly dried-fruity, even though it's chockas with the stuff.

Put simply (and, of course, completely objectively) it is The Best Thing Eva. There's no fancy stuff in this recipe - no suet, or glace anything, or nuts or anything vaguely spicy. It's just dried fruit, brandy, eggs, butter, flour and golden syrup. And when it's been boiled for seven hours (six when you make it, one on the day of serving) it's moist and delicious and well worth the "I'm so full I'm going to be sick" feeling that is the inevitable end result of Christmas feasting for so many of us. 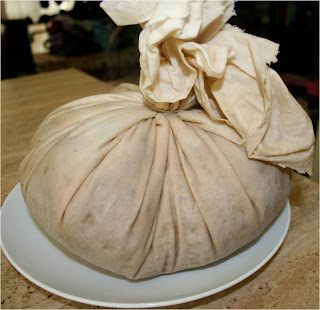 I have no idea where this recipe comes from, but for as long back as I can remember, Christmas day at my maternal grandmother's house was always capped off by Nan unwrapping the pudding, drowning it in brandy sauce and handing it out to a table full of expectant relatives. Usually the pudding had been hanging in her pantry for a few months, maturing to perfection. Even as a child I knew to savor it, because unlike a traditional roast dinner, I knew I was only getting this pudding once a year. Needless to say, there was always  a queue for seconds, and the huge saucepan of brandy sauce never went the distance no matter how much Nan made.

At a certain point Nan got too old to go through all the fuss of pudding making, so she passed the baton onto my sister, both my mother and my aunt having declared themselves not interested enough in cooking to master the art of the pudding. Once I saw that my sister could replicate my Nan's success, I got in on the act, too, and introduced my husband's family to the joy's of Nan's pudding. Now, every year my sister and I reserve a day to make our pudding. For that day, we are tied to the kitchen, watching our boiling pudding, adding water to the pot, generally fussing around this precious thing until its six hours in the hot seat are up.

Unlike Nan, I have never tried to make my pudding early and leave it hanging for months to deepen the flavors, or whatever that's about. My sister lost a whole pudding to mold one year, and we both agreed it was too painful a process to risk that kind of attrition. So now we boil our puddings a week or two before Christmas and store them in the fridge. A little less romantic than Nan's way of doing things, I know, but very practical. We have also freelanced from Nan's recipe a little by increasing the amount of brandy we use to soak the fruit. Nan's recipe included only a few tablespoons of the good stuff. My sister and I both decided this was barely enough to dampen the fruit! So we glug a decent amount of brandy over the fruit so that it's got plenty of liquid to soak up and rehydrate with. The recipe below has been adjusted to allow for our heavy-handedness, so feel free to tweak to suit your own tastes.

So, without further ado, here is Nan's recipe:

Cut up raisins and dates so that all pieces are of an even size, about  the size of a sultana.
Mix all the dried fruits together.
The brandy sauce we make to accompany this is basically a sweetened white sauce with brandy added - milk thickened with cornflour, sweetened with sugar, and the brandy added to taste.

If you are tempted to give this a try, I promise you you won't be disappointed - it comes out a gorgeous golden-syrupy color and tastes so rich and delicious. I cannot wait till Christmas day now that I've written this all up - yummm! Sadly, I only have the  one picture of my pudding from last year. This year I will take many more so I can show it off with pictures as well as words next time anyone is foolish enough to ask about my Nan's pudding. 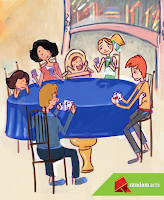 I'm sure Sarah won't mind me book-ending her post with a little reminder about Random Acts. As part of TDoCFaRBE I'm encouraging you all to undertake a Random Act of Kindness throughout the festive season.

The latest hint from Random Acts is a lovely one -- why not give someone the gift of your time and attention and make a visit to your local nursing home or to an elderly neighbour?