Well, it's finally here -- not Christmas! Well, not quite. No, it's the last post in the magic that has been:

My final guest on TDoCFaRBE is the amazing Rachael Johns. Rachael writes cracking contemporary romance and while Christmas is always a wonderful time, especially when you have three little heroes-in-training running around the house as Rachael does, I'm sure she can't wait for January when she has two new books hitting the shelves! (See details after Rachel's divine recipe.)

I'd like to take this opportunity to thank all the gorgeous authors who've taken the time to be part of TDoCFaRBE. This started as a last-minute, over-excited idea when I began thinking of what sort of cooking I needed to do for Christmas. And I couldn't be more thrilled with the enthusiasm and contributions from everyone I invited to take part. Now, take it it away, Rachael!

Thank you Emmie for inviting me to take part in your lovely Christmas blog series. I must admit I love Christmas – for a number of reasons but especially for the excuse to eat a whole host of delicious food. Ooh, my stomach is rumbling just thinking about it.

Saying that, I would much prefer other people cook the main Christmas meal. I used to be quite a good cook but over the course of the last few years, I’ve sadly gotten worse and worse. NOTHING seems to work for me at the moment. So, you can imagine my stress when the last week of school I was told I needed to make kid-friendly White Christmas crackles for a school function. As I said, my cooking leaves much to be desired lately but when it’s for something important, it always fails. So I decided not to follow a recipe but to make up something and just hope for the best.

I have three fussy boys and I wanted something they would actually eat as well. So, I decided to forgo the partly-healthy White Christmas recipes I saw on the net (with dried fruit and nuts in) and go for something all out naughty! The end result was surprisingly delicious and the process really easy. Even the adults enjoyed them, so I would recommend this recipe for anyone needing to make something yummy that looks good but is really simple and quick to make. 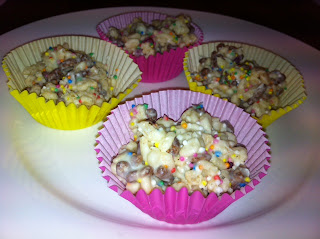 Method:
Place all dry ingredients in a mixing bowl and mix.
Melt white chocolate and copha together over low heat.
Pour white chocolate mixture into dry ingredient and stir till combined.
Spoon generous amount of mixture into muffin-size patty pans – I made about 15 but you can alter the size of the crackles to make more or less.
Place in the fridge for half an hour!
Ta-dah!! It’s that easy!

As you can see this is the simplest recipe ever but it tastes and looks really good. So, if you’re not much of a cook (sadly like me now), then this is a fabulous treat to make when you need to take a plate to that Christmas party.

N.B You can alter what you put in to make these more adult-friendly. I’d like to try it with some nuts one day J

As an anthropologist, Holly McCartney is more comfortable in a museum than shopping on Rodeo Drive. She isn’t prepared for the media frenzy on her arrival in L.A. to accept a posthumous acting award for her late sister….or for her sister’s gorgeous friend Nate Devlin to come to her rescue. Though he resents her for some reason, she can’t fight their irresistible chemistry—especially when the paparazzi force her to stay at his mansion.

Photographer Nate only agrees to help Holly survive Hollywood for her sister’s sake, but she soon gets under his skin in a way no other woman has. The more time he spends with her, the more his attraction grows and he finds himself opening up to her in ways he never expected. But will ghosts of the past stand in the way of their perfect Hollywood ending?

Imogen Bates moved to the small rural town of Gibson’s Find to start a new life for herself after the death of her husband. Tired of being haunted by the painful memories of her old life, Imogen set her last remaining hopes on the little town and, in particular, pouring her heart and savings into restoring The Majestic Hotel to its former glory. But while the female-starved town might be glad to see a young woman move in, not everyone is happy about Imogen’s arrival.

Sheep and crop farmer Gibson Black once dreamed of having the kind of family his grandfather reminisces about, but he’s learnt not to dream anymore. Living in the mostly male town suits Gibson down to the ground...and he won’t have anyone — least of all a hot redhead from the city — change a thing.

And the last day of TDoCFaRBE brings my last reminder about undertaking a Random Act of Kindness this festive season, as prompted by  Random Acts.

A new idea from Random Acts is to think about adding someone extra to your Christmas card list. It could be a soldier overseas or simply a friend or family member you haven't spoken to in a while.

And you can always send Random Acts a donation and wear a smile all day.